The evolving landscape of European priorities – which ones should research infrastructures address, how, and if at all

For years, pan European research infrastructures (RIs) and large-scale national facilities have contributed to the excellence of the Union’s science base. In European programmes, they were firmly nested in the Pillar dedicated to scientific excellence and supported though a dedicated work programme. In addition, they have contributed to training, innovation, and partly also to the other pillars of the programme, such as the one addressing societal challenges. ESFRI, the European Strategy Forum on Research Infrastructures, since 2002, has been supervising the establishment and development of a Pan-European Research Infrastructures landscape. So far, this has led to a pooling of national resources in excess of 10 billion EUR. The field even got a dedicated regulation, the ERIC Regulation, a rarity in the domain of research and innovation, which is otherwise largely based on soft law, such as Council Conclusions. Today, the European approach to the field of research infrastructures is rightfully considered a huge success, managed jointly at EU level, in collaboration with Member States and associated countries through the European Research Area (ERA).

At the onset of the next European research and innovation programme, Horizon Europe, due to start on 2021, not much appears to have changed for research infrastructures, as compared to the current funding programme, Horizon 2020. They have their dedicated chapter of the programme in Pillar I dedicated to scientific excellence, aimed at supporting similar activities for a similar amount of funding.

While not much has changed for this Pillar, there are significant changes across the rest of Horizon Europe. Most relevant to this discussion is its emphasis on delivering on the needs of society, largely reflected in Pillar II, called Global Challenges and European Industrial Competitiveness, through its five clusters, dedicated to societal challenges, including Digital and Industry. European partnerships[1]will have much more prominent role than in the current programme. However, the main new element are the five mission areas. The missions stemming from each of the mission areas, when elaborated, will differ from the societal challenges in that they will focus on delivering against a specific target within a specific time frame, like taking a man to the moon and back before the 1970s.

the RIs are to address how the RI communities will contribute to the five mission areas of Horizon Europe. The latter is also expected to focus on the contribution to the EU Green Deal.

CERIC warmly welcomes the initiatives proposed by the various RI communities and wishes to contribute to the discussions. With this in mind, the present opinion addresses the following issues: 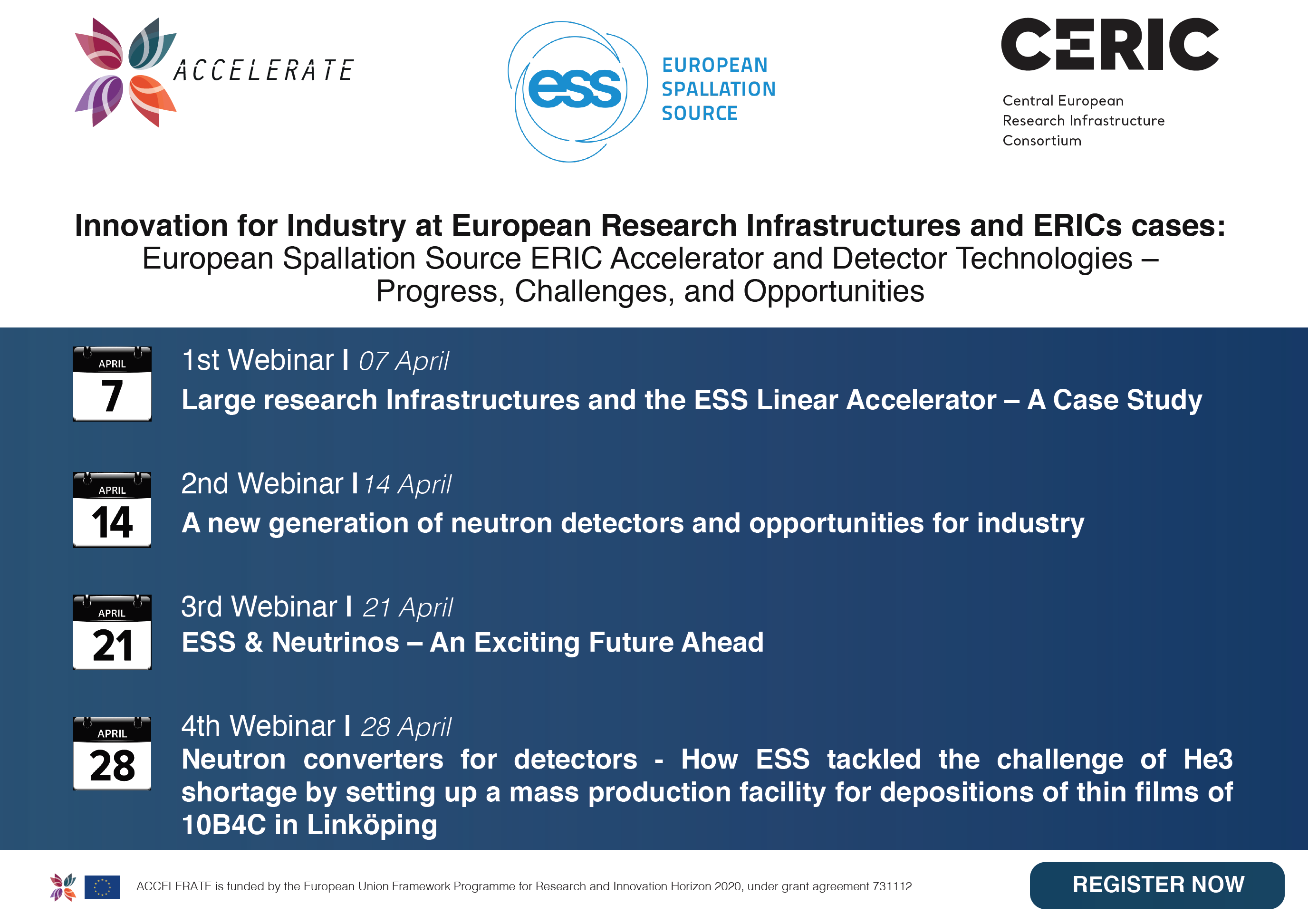 In the frame of the H2020 project ACCELERATE, a series of webinars highlighting examples and cases of innovation for industry at European Research infrastructures in general, and ERICs in particular will be held in April 2021. Each talk … END_OF_DOCUMENT_TOKEN_TO_BE_REPLACED
Apr
20
Tue
11:30 am Save the date ► ACCELERATE Webin...
Save the date ► ACCELERATE Webin...
Apr 20 @ 11:30 am – 12:30 pm

CERIC is organising a meeting focusing on the relationship between Energy companies (batteries, energy storage, fuel cells) and Research Infrastructures (RIs). It will be held online on 29 April at 09:30 CET on the following … END_OF_DOCUMENT_TOKEN_TO_BE_REPLACED
May
25
Tue
2:00 pm Register now ► Planning for Sust...
Register now ► Planning for Sust...
May 25 @ 2:00 pm – 6:00 pm 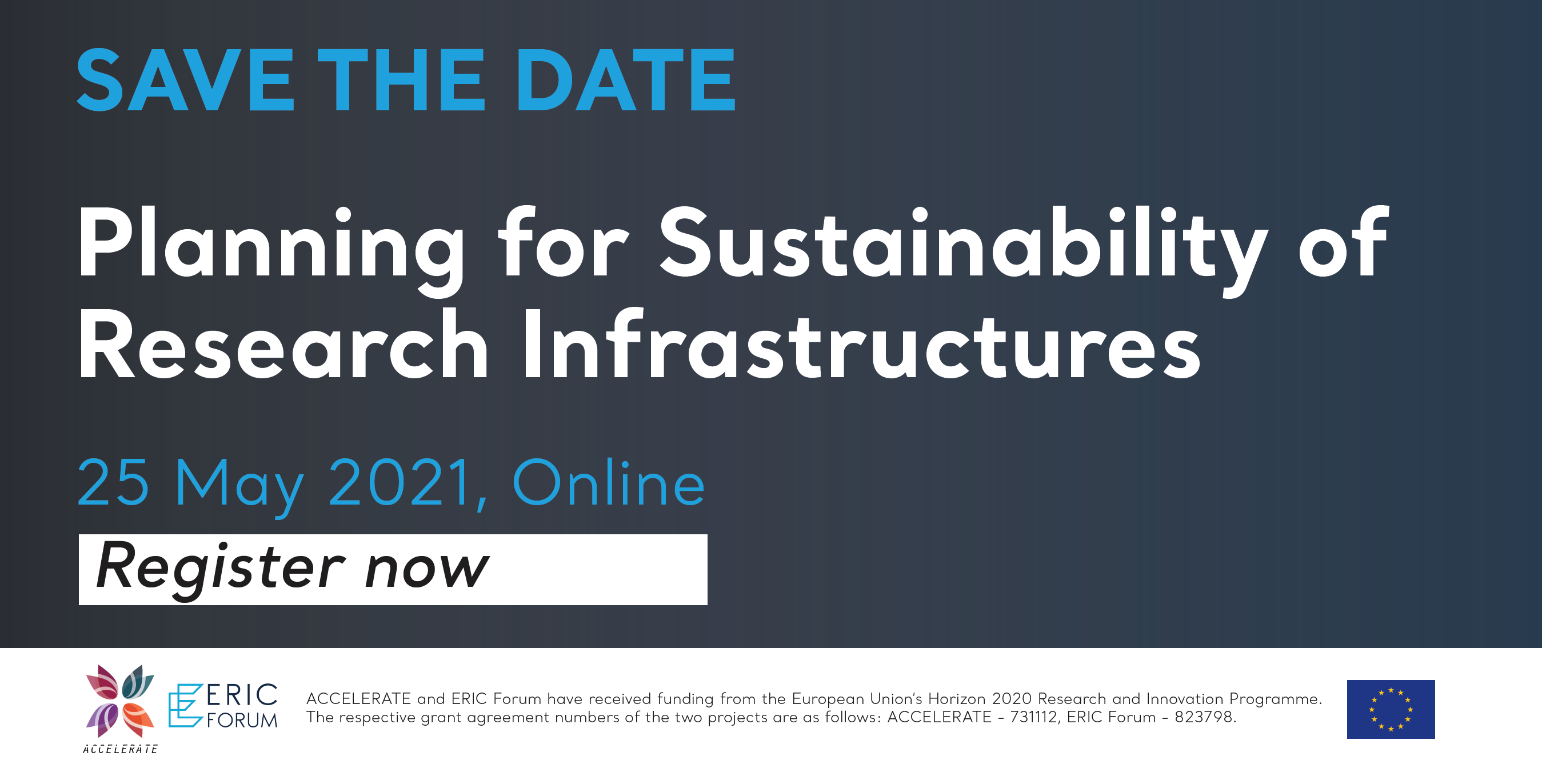 In the frame of the Horizon2020 projects ACCELERATE and the ERIC Forum Implementation Project, the event ”Planning for Sustainability of Research Infrastructures” will be held online on 25 May 2021. It will bring to the … END_OF_DOCUMENT_TOKEN_TO_BE_REPLACED
May
31
Mon
all-day HERCULES Specialized Course 2021...
HERCULES Specialized Course 2021...
May 31 – Jun 9 all-day

Description The HERCULES Specialized Course (HSC) is an extensive training that is being organized since 2006, taking place after the main HERCULES School, and combining both theoretical and practical sessions. This year’s edition will be … END_OF_DOCUMENT_TOKEN_TO_BE_REPLACED
View Calendar
Add

31 May - 09 June 2021, Online
Register now ► HERCULES Specialized Course 2021: The multi-technique approach of CERIC-ERIC as a tool for Nanoscience